Alan McLeod PhD, Founder and Director of Health Innovation Support has twenty-five years of experience in the medical industry.

Alan designed a braided artificial anterior cruciate ligament which is one of the main structural supports in the knee. He manufactured the first device, wrote the production documentation, trained the production staff and trained the quality control staff. Thousands of these ABC ligaments were implanted. Alan’s PhD established why an artificial knee ligament was breaking in clinical use.

A number of the Surgicraft ABC artificial knee ligaments were failing in clinical use with some ruptures occuring spontaneously within a few months of implantation.

The broken ligaments were sent back to Alan for mode of failure analysis in order to establish why they were breaking. The clinical hypothesis was that the ligament was just not strong enough and needed to be strengthened.
Alan was a post-graduate student at the Department of Textile at UMIST (now part of the University of Manchester) where there was experience in the study of why textiles such as mooring ropes failed.

Alan cleaned the tissue off the explanted ligament using enzymes in an incubator in order to expose the polyester filaments at the failure point so that the fracture morphology could be examined using a scanning electron microscope.

Alan was able to establish that the ABC ligaments were failing at the point where they emerged from the tibial drill hole into the knee joint.

Any failure of the ABC ligament within the first year of implantation was associated with crushing and flattening of the polyester over a matter of just a few millimetres just level with the edge of the drill hole with just a very few strands failing with tensile breaks.

By working closely with a clinical research fellow, Alan was able to link this crushing and flattening damage to a drill hole that was too far forward in the knee. This placement resulted in the guillotining of the ligament between the intercondylar notch and the edge of the drill hole crushing the polyester and causing sequential failure across the ligament until the last few strands failed with a tensile break.

The route of the ABC ligament used to reconstruct an Anterior Cruciate Ligament in the knee.

The tibial remnant of an ABC ligament that failed in clinical use just at the point where it emerged from the tibia into the centre of the knee joint. Crushing and flattening damage worked its way through the ligament until the last strands on the right failed with tensile breaks.

Crushing and flattening of polyester filaments.

The establishment of the cause of the failures immediately led to the development of an instrument called a rhino horn to ensure that the drill hole through the tibial was placed just far enough back in the joint to avoid the risk of the ligament being guillotined when the knee was extended and the leg straightened. 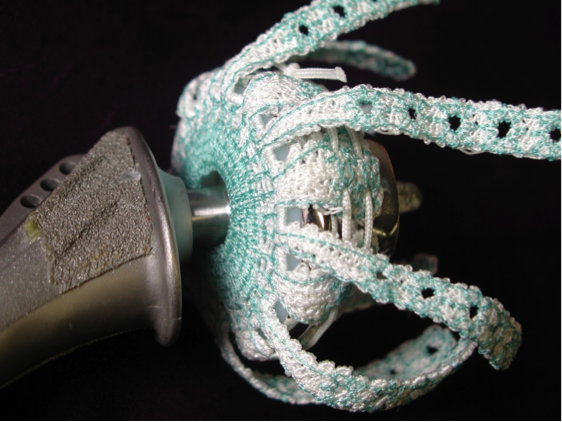 Contact Health Innovation Support today for a CONFIDENTIAL no obligation discussion about how we can help you with your idea.

We use cookies to ensure that we give you the best experience on our website. If you continue to use this site we will assume that you are happy with it.Ok